St Mary's School was founded in 1465 making it one of the oldest schools around. Shortly before the turn of the millennium, the school moved from its old site in East Street next to St Mary's Church to the impressive refurbished building in Boston Avenue to cope with expanding numbers of pupils. Additionally, in October 2012, we celebrated the 100 year anniversary of the current building as shown on the stone in the wall by the entrance. In September 2015, St Mary's School made a return to East Street because the school has expanded to three and four form entry so two sites have now become necessary.

I would like to say a huge thank you to Alan Eve for his painstaking research to present this fascinating history of St Mary's School.


St Mary’ School Prittlewell - a brief history
Background
The original Manor of Prittlewell was known as PRIORS and part of it was the manor of MILTON (this was held by the church of Holy Trinity, Canterbury in 1086) It covered about 900 acres. Boundaries were: coast in south and east; around Chalkwell in west; Warners Bridge in north.
Changes occurred over the years and by the early 12th century Priors was joined by the following manors:-
EARLS FEE with POLSTED-WIC - Earls Hall
TEMPLE SUTTON - so called from being held in the 13th century by the Knights Templar
MILTON HALL - now the site of Nazareth House
CHALKWELL HALL -site not determined but believed to be a quarter mile south west of the present building in Chalkwell Park
Earls Fee takes its name from the family of De Vere, Earls of Oxford who held it from the 13th century. The manor house was on the site of the later Earls Hall - about a quarter mile west of the Priory buildings and separated from it by the road to Rochford. This was the name that survived.
Polsted-Wic was at the eastern end of Earls Fee at the junction of East Street and Sutton Road.
The village of Prittlewell was part in Priors and part in Earls Hall.
A plan of 1717 shows the boundary of Earls Hall through the centre of the village, from Cuckoo Corner southwards along Rochford Road and North Street (now both Victoria Avenue) and along East Street; land east of the main road and north of East Street was Priors; west of the main road and for some distance south of East Street was Earls Hall.
The village pound was on the south corner of the junction of Fairfax Drive and Victoria Avenue - in Earls Hall manor. The old school was eventually established on the opposite side of Victoria Avenue in 1727 (in part the gift of the lord of Priors) in Priors manor.
References suggest that Earls Hall became the principal manor as far as the village was concerned: a grant of a market at Prittlewell in the 13th century was to the lord of Earls Hall.
Significant dates in later history:
c.1110 Robert Fitz-Sweyne endowed a monastery at Prittlewell. Monks were under the order of the Mother House at Cluny of Burgandy. They farmed land, maintained bridges, repaired highways, cared for the sick and the spiritual wellbeing of the villagers. There were on average about 16 monks. No mention is made of education.
1536 The monastery was sold up in the Dissolution and in the following years it was sold to various private owners for sums ranging from £400 (1537) to £800 (1547).

1800 Village consisted of property adjacent to church.
East Street - houses or shops to about half way between Blue Boar and Sutton Road.
A few houses at eastern end of West Street.
North Street property extended nearly as far as Earls Hall.
No direct road to south.
1801 Population of Prittlewell, inclusive of Milton and Southend, was 1213: 50 years later it was 2462.
1823 A guide book to New Southend, for visitors, described Prittlewell as “a large village, with handsome church suited to the extent of the parish.”
1824 Similar book mentions the vicarage which stood near the church. At the east end of the parish was “a Charity School and also a commodious Work-home.”
1842 With the creation of the new parish of St John the Baptist in Southend, Prittlewell lost some of its area.
1848 Population of Southend around 1600 permanent residents although the summer population was much higher.
1877 Prittlewell becomes part of the Urban District of Southend as a Ward with 3 representatives.
1887 Prittlewell described as “an ancient and agreeable village, consisting of two streets at right angles to one another.”
1899 Victoria Avenue opened as a direct route to Southend. Prittlewell Station was also opened.
1929 An Open Air School in Fairfax Drive.
1938 Southend High Boys moved to Earls Hall Estate (old premises became Municipal College).
Earls Hall elementary School opened - for Prittlewell’s increasing population. 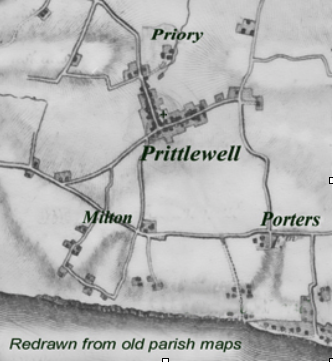 Learn more about our core values

Unfortunately not the ones with chocolate chips.

Some cookies are necessary in order to make this website function correctly. These are set by default and whilst you can block or delete them by changing your browser settings, some functionality such as being able to log in to the website will not work if you do this. The necessary cookies set on this website are as follows:

Cookies that are not necessary to make the website work, but which enable additional functionality, can also be set. By default these cookies are disabled, but you can choose to enable them below: